SERGEANT STUBBY IN THE GREAT WAR
1

Read an Excerpt from Sergeant Stubby In The Great War...
Part One: Becoming a Soldier
The hot summer sun shined down brightly on the tall metal garbage can in the narrow, dirty alley behind Milton’s grocery store. It seemed to cook the discarded scraps of beef and bones the butcher had thrown inside it earlier that morning. The aroma filled the air.
Yum! a very hungry, homely looking puppy thought as he smelled the savory meat with his short, stumpy nose. He approached the can curiously. Mom brought something that smelled just like that home the other day for dinner. Could this mean she’s somewhere around here? Or maybe even inside this can?
He excitedly jumped up toward the top of the garbage can and tried to knock off its silver cover as he yelled, “Mom! Mom—OUCH!”
The hot metal lid burnt his small white paws, causing him to flinch. He fell to the ground with a loud THUMP! 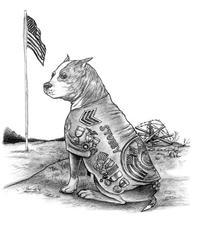 The little puppy stood back up and shook the dirt off himself. But after searching for his mom for the past two days straight through dirty alleyways and the muddiest part of the park near where they lived, it did little use to make his short, tan and white brindled fur any cleaner. He was in desperate need of a bath. As he looked out into the nearby busy street, full of people and honking cars, he feared by now he’d never find her in such a large, noisy city.
Scratch, scratch, scratch.
What was that? the little pup thought. He spun around to see where the strange, faint sound was coming from. He inched over slowly toward the corner of the alley and perked his short, pointed ears straight up. He strained to hear whatever sounds he could that were coming from behind the large metal garbage can, which was now the only thing standing between him and the soft, peculiar noise.
Scratch, scratch, scratch!
It sounded like someone was digging themselves out of a hole in the ground. Maybe it was his mom and she had been hiding!
“MOM!” the little brindled puppy yelped out excitedly. He ran behind the large can, hoping to finally find his long-lost mother. His stubby little tail wagged back and forth happily.
“AAHHHH!” a small, timid mouse screamed as she looked up and saw the tan and white pup. Though he was not even fourteen inches tall, he was still big enough to tower over her like a giant.
“Please don’t eat me!” the little brown mouse pleaded. “I was only trying to get some bread for my children. But here, you can take that to eat!”
The scared little mouse held out a tiny piece of stale bread toward the pup. Her whole body shook in fear as she waited for him to either take it, or eat her.
“I don’t want to take your food or eat you,” the little puppy assured her.
“Then what are you doing here?” the mouse asked.
“I’m looking for my mother,” the little pup said. “Have you seen her? We were living in the park across the street under some bushes, but two days ago she went out to get some food and never came back.”
“Oh no! That’s terrible!” the mouse said, appearing very worried. “Then I’m afraid she got snatched up like I’ve seen other dogs get snatched up. You have to be very careful to never trust humans, you see— ”
“What do you mean? Snatched up by what?” the little pup asked. His wide brown eyes were filled with concern.
“The dogcatcher,” the little mouse whispered, as if saying it any louder was too scary. “He goes around all over the city snatching up dogs with his net that he doesn’t think have homes.”
“What does he do with them?”
“Nothing good, I fear, because after they’re caught I’ve never seen one ever come back around here again. But then he—that awful, mean dogcatcher—is always back here with that big, strong net, looking for even more dogs to snatch up! You have to be afraid of humans in this city, I tell you! You never know what they will—”
“YOU—little dirty dog! Get away from MY garbage can!” a plump, angry man wearing a white, blood-stained apron with the words “Milton’s Groceries” on it yelled. He swung a large broom toward the puppy and—unknowingly—the little mouse too.
The little pup ducked just in time as the long straw bristles sailed straight over his head. The broom smacked against the side of the can, knocking the cover off and causing it to roll on the ground right between him and the butcher. Meanwhile, the little mouse, clutching her bread, scurried off through the dirt hole entrance to her home and disappeared inside it, safe from view.
“Get out of here or I’ll call the dogcatcher on you! Just like I did the last mangy stray mutt I found sniffing around here!” the red-faced butcher threatened.
He chased the frightened little puppy down the alleyway and toward the busy street.
The little puppy’s legs, which were actually quite long and thin for his thick, stocky body, ran as fast as they could through the crowded street. Women who were out shopping for the latest 1917 fashions all gasped as he passed by them. He then zipped past a group of college students standing together on the street corner, but they were all too busy discussing the important news in the latest edition of the Yale Daily News to even notice the little dog.
“Get that little MUTT!” the butcher yelled as the puppy’s incredibly fast legs led him further away, down the street, until he was completely out of sight. People looked around to see what dog he was referring to, but by then it was too late. The puppy was already running down the next street, and then the next, never looking back as he just kept on running...